How to Store Your Snow Blower for Summer, 2019

​Why today's emission standards make treating fuel more critical than ever before.

Storing a snow blower in 2019 is much different than it was in 1970. Today, ethanol-blended fuels and efficiency standards for outdoor power equipment require snow blower owners to be extra attentive to their machines at the end of the season. If these critical steps aren't completed correctly or skipped, it's quite possible your snow blower won't even start next season, leaving you with a shovel, frustration and a repair bill.

That's a common Google search entry and it's a common issue with outdoor power equipment today. A snow blower that won't start is the biggest source of frustration when the big storm hits, and usually, it's because of nothing more than a clogged fuel line.

Due to today's efficiency mandates from the U.S. Government, small engines are required to use less fuel. Because of that standard, carburetor jets, which are used to cont​​rol fuel flow in a fuel system, are much smaller than they used to be. If fuel can't pass through the tiny hole in a carburetor pilot jet (see photo), the fuel flow is stopped and the engine won't run. All it takes is the smallest obstruction to ruin a Saturday night snowfall. 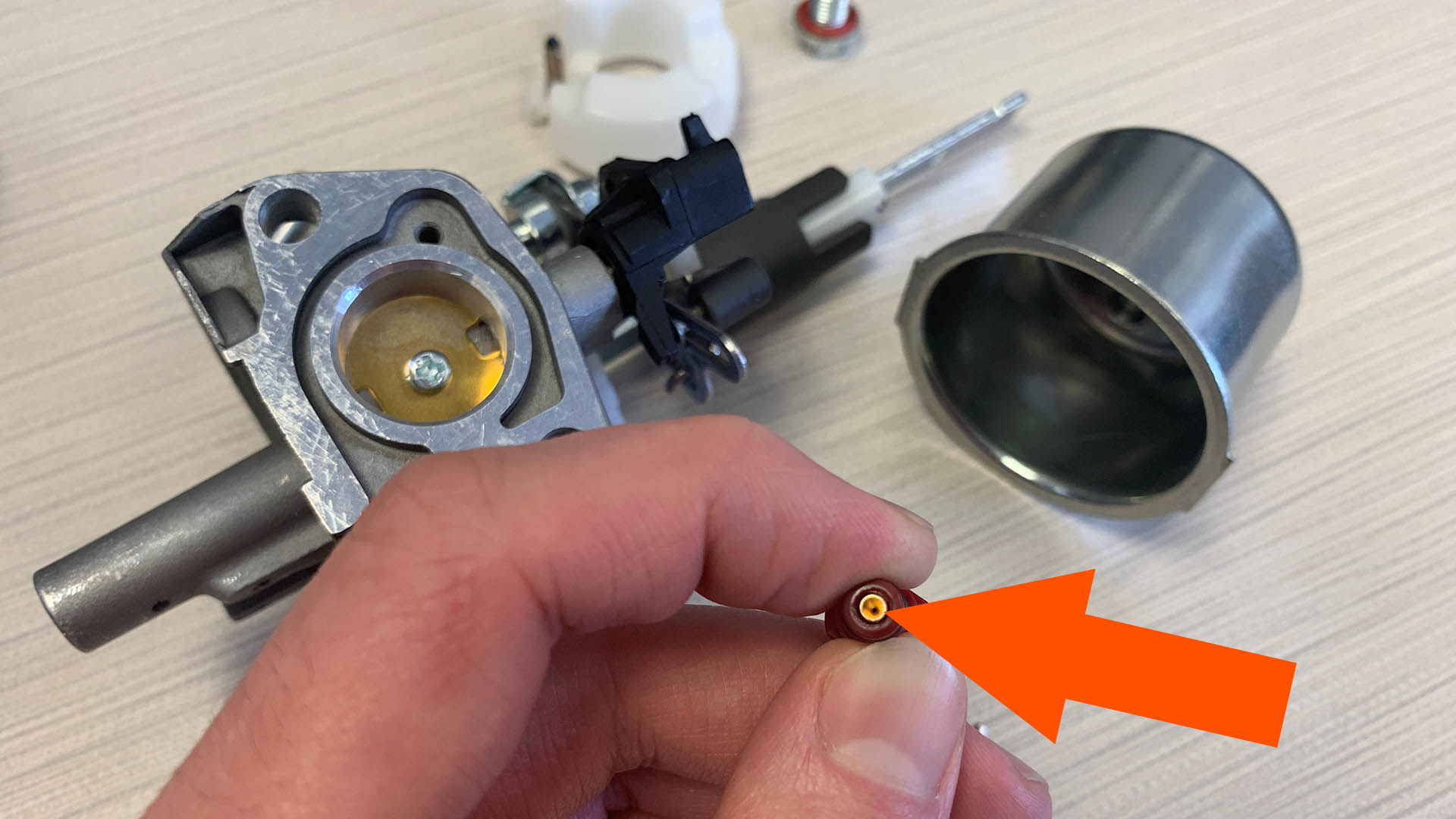 Why gasoline is so sen​sitive

Gasoline today is a lot different than it was in 1970. In fact, it's not even gasoline, it's a blend of fuel. Today, most regular, unleaded gasoline is an E10 blend, meaning it contains up to ten percent ethanol. Though E10 blended fuels are technically acceptable for use in a snow blower, use of 100 percent gasoline in a small engine is best. Even the lowest ethanol content can damage a small engine.

Ethanol is problematic in small engines for numerous reasons and storing a small engine with ethanol-blended fuel in the tanks is especially risky. Why? Because ethanol dissolves old gum and varnish deposits in the fuel system and tank. Once dissolved, those small particles can enter the engine's fuel lines and clog the tiny hole in the carburetor jet. To help reduce the possibility of ethanol-related problems in a snow blower engine, add Ariens ethanol fuel treatment to the fuel tank.

Non ethanol gas near me

Why you should stabilize snow blower ga​soline

Using fuel stabilizer in your snow blower engine will help prevent gasoline from deteriorating, turning to a gel and clogging the fuel system.

All fuels, both ethanol-based blends and 100 percent gasoline, oxidize and break down. Gasoline and gasoline blends can deteriorate in as little as two weeks and leave a gel and a varnish in the fuel system, and clog it. To help prevent gasoline from breaking down in the fuel tank, Ariens recommends adding a quality fuel stabilizer to fresh gasoline. Treating fresh gasoline (less than two weeks old) preserves the fuel during storage and prevents it from breaking down and clogging the fuel system. Just be aware, fuel stabilizer only keeps fresh fuel fresh; old fuel cannot be rejuvenated with fuel stabilizer. 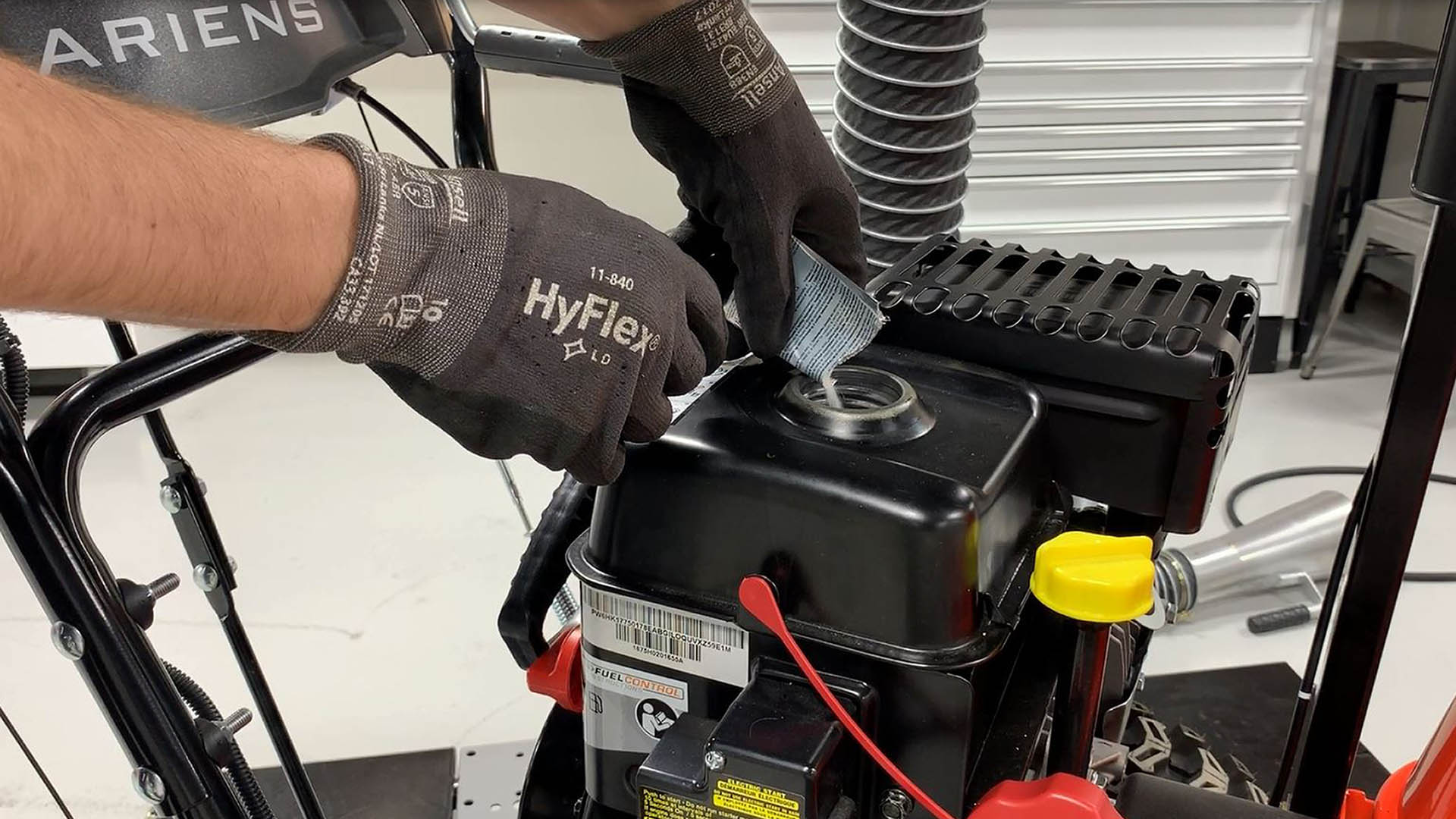 Snow blower gasoline older than two weeks should not be stabilized before summer storage. Instead, it's recommended to completely drain that fuel tank, then run the engine until all fuel that was in the fuel lines and carburetor is used and the engine stops on its own. Detailed instructions can be found in the snow blower operator's manual.

If you forget to do it, the wheel could be permanently stuck to the axle.

Because of all the moisture and ice-melting agents like salt that contact a snow blower, corrosion and rust can build up between the wheel hubs and the axles. If the axles aren't periodically cleaned and lubricated, they could rust together. If a wheel is permanently fused to its axle, accessing the hardware to remove the bottom cover on the unit will be a very inefficient and unpleasant experience.

Remove each wheel from the axle. If rust is present on the axles, remove it with sandpaper, wipe clean and coat with a thin to medium layer of grease. Also, clean and lubricate the axle ends where the snap clips are secured to. If neglected, the snap clips can also rust to the axle and prevent wheel removal. 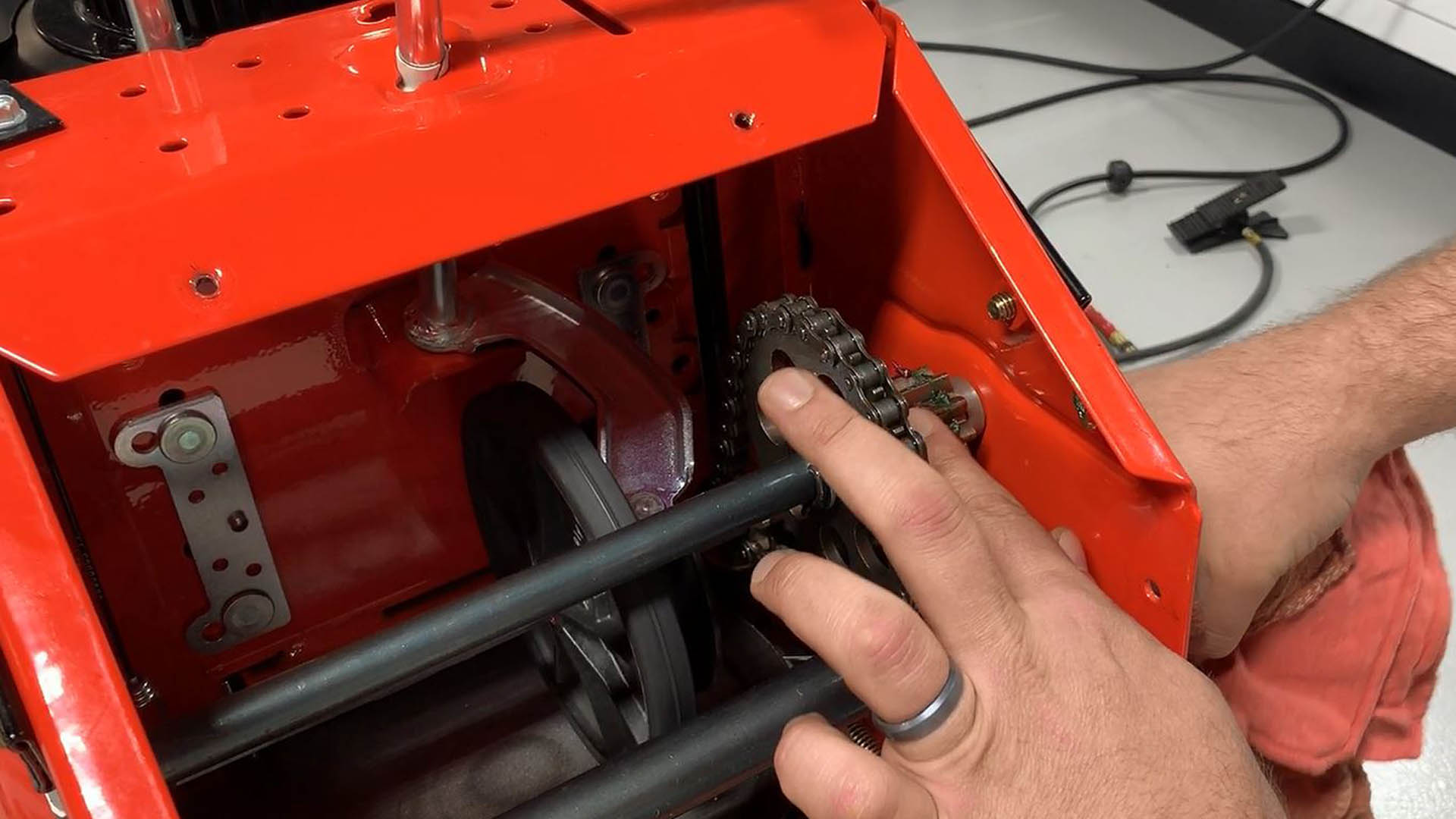 Just this last season, a friend of an AriensCo marketing manager asked him why the shift lever on his Ariens snow blower wouldn't move. The answer was because the components in the tractor weren't lubricated and rusted together.

No snow blower tractor is water tight – moisture will get into the frame. Preserve the mobility of those critical moving parts inside the frame with regular lubrication. Though that part of the machine may seem intimidating, accessing those components is extremely easy. Simply remove the bottom cover from the snow blower and perform the following procedures as directed in the operator's manual: 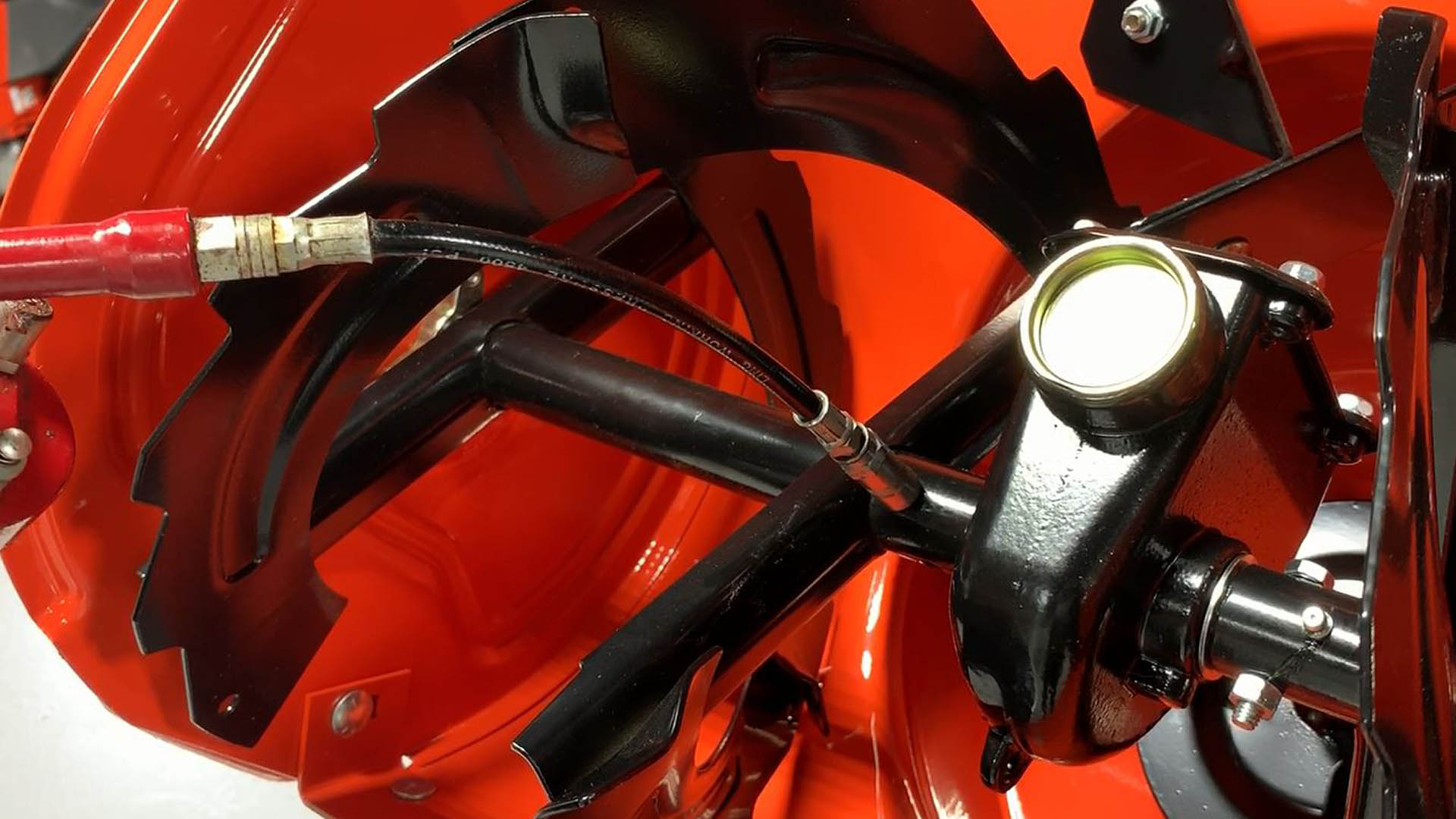 Bust an auger? Throw a shear bolt? Want to not damage the auger gearcase if you hit a rock? If you said yes to any of those, the augers will need to be lubricated so they can spin freely on the auger shafts.

Snow blower engines won't necessarily need storage maintenance, however, if it's time for an oil change, do it now so you don't have to later. Snow blower engines are easy to maintain because they don't have an air filter or oil filter. Change the oil and that's it. Learn how in our quick video.

Does a snow blower need a new belt after one season? Maybe. If they appear worn, then it's time to change them. Not necessary for storage, but once again, it's best to be prepared for next season. Learn how in our quick video.​

As with belts, just make sure it's not worn and it's ready to go for next season. Learn how in our quick video.​

Ensure no hardware is loose or missing. To replace missing hardware, consult our parts manuals to find replacement part numbers. Replacements can be ordered at parts.ariens.com.

How to wash a snow bl​ower

All it needs is low-pressure water and a mild soap solution to wash away all dirt and salt.​

For replacement parts like lubricants and oils, visit your nearest Ariens dealer or get the parts shipped directly to your door from parts.ariens.com.