There's no point in owning a snow blower if it's not being taken care of. Like all outdoor power equipment, snow blowers need to be maintained regularly to continue operating at peak performance and clearing driveways for ye​ars to come. Snow blowers that aren't taken care of can lead to expensive repair bills, painful trips to the junkyard and an unnecessary amount of time spent shoveling out from the next snow storm.

Follow the maintenance tips we listed below to keep your shovel in the garage and your quality snow blower performing as well as it did the first time you used it.

Maintenance also differs depending on if you have an electric or gas powered snow blower. Electric snow blowers require less maintenance compared to gasoline powered machines because electric units don't have engines that need regular oil changes and the occasional spark plug replacement​. However, electric equipment doesn't necessarily mean zero maintenance. Worn down parts like auger paddles, belts and batteries will still need to be checked regularly and replaced when necessary.​​​

Two stage snow blowers use serrated steel blades or augers to cut through moderate, heavy, wet or icy snow. Though they can be damaged if they strike an object like a large rock, two stage snow blower augers generally don't wear because they don't contact clearing surfaces and they're made from strong material. However, though they don't wear, they still need to be maintained.​

Two stage augers are connected to auger shafts. It's metal on metal, and because moisture can get between those parts, they have the potential to rust together if they're not maintained. If that happens, the augers can't be separated from the auger shaft if the auger gets damaged and needs replacement. Help prevent the augers from rusting together by regularly pumping grease into the grease fittings or "zerks" on the augers. 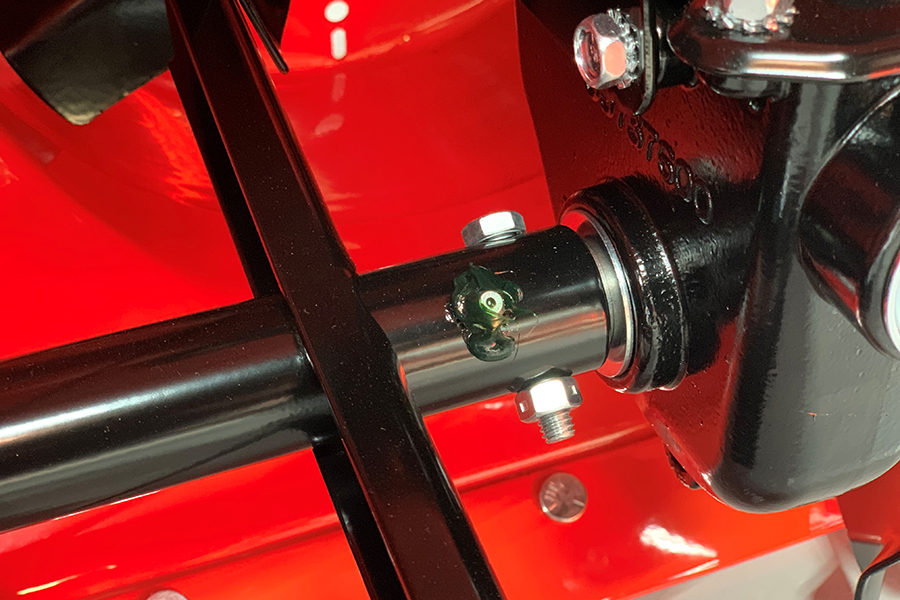 Worn scraper blades won't clear snow as well as they did when they were new. Friction between scraper blades and their clearing surfaces causes the blades to wear and leave more snow behind. If you start seeing more snow left behind your snow blower, it's a sign you'll need to adjust your scraper blade. If your scraper blade is adjusted as far down as possible and isn't scraping all the snow from the ground, install a replacement. 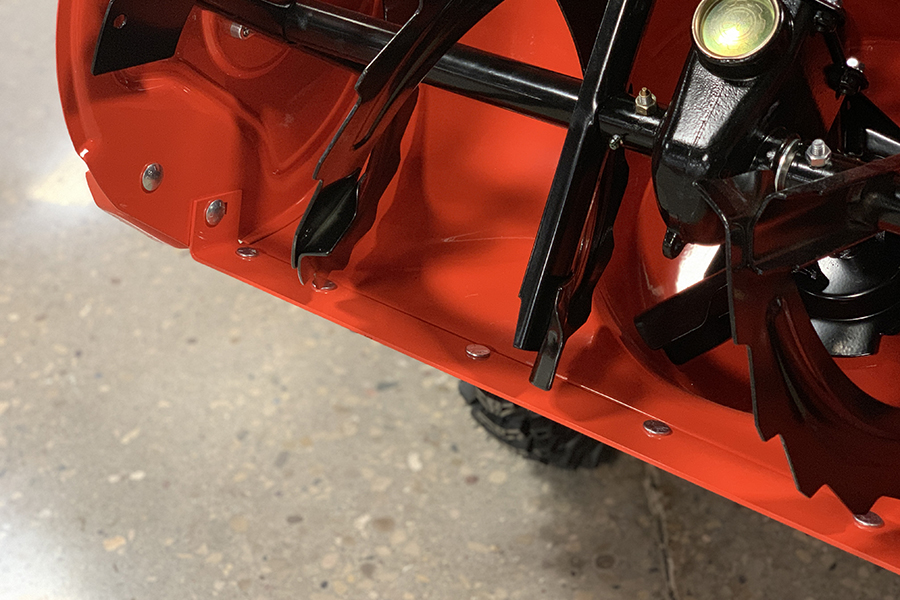 Two stage snow blowers have a skid shoe on each side of the auger housing to regulate the height of the augers and the scraper blade above clearing surfaces. Like scraper blades on a two stage unit, the steel skid shoes are also made from steel. Though strong, contact by the skid shoes with abrasive clearing surfaces scrapes paint from the shoes, exposing bare metal to moisture, causing rust and corrosion. Skid shoes on Ariens snow blowers can be flipped to the other side, but once both sides wear through, they'll need replacement. 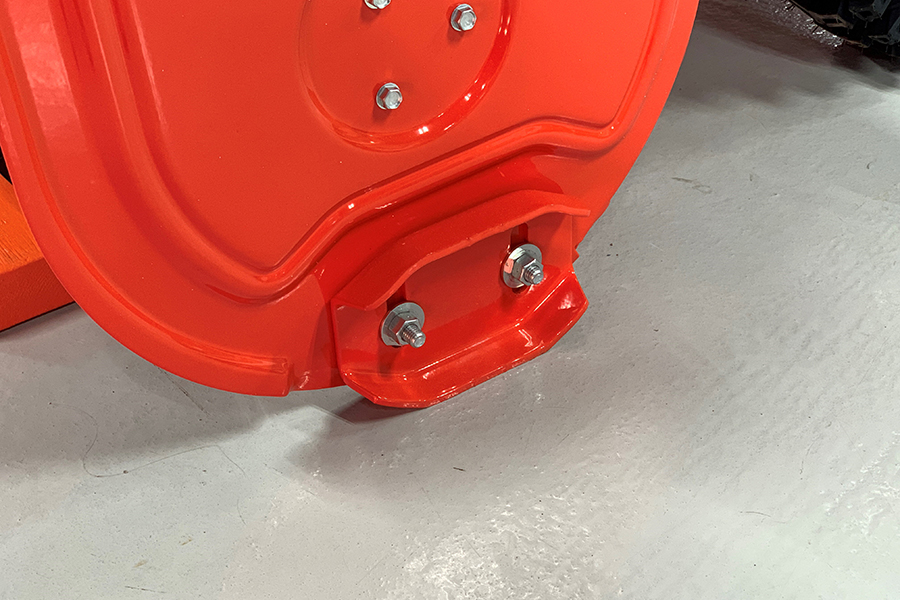 Shear pins, also known as shear bolts, secure a two stage snow blower auger to its auger shaft and break if the auger encounters too much resistance. This is by design. Shear bolts are a feature which protect the gearcase if an object stops the auger, such as if a large rock were to become wedged between the augers and the housing. When this happens, the shear bolt breaks or "shears" and the auger shaft continues rotating – preventing the auger gearcase from incurring damage.

Even the smallest and most unexpected objects can cause a shear bolt to break and leave an auger idle, which is why it's important to keep a healthy stock of extra shear pins on hand. When one busts, you can replace it quickly, and continue clearing. Without spares, you're left with an auger that won't turn. 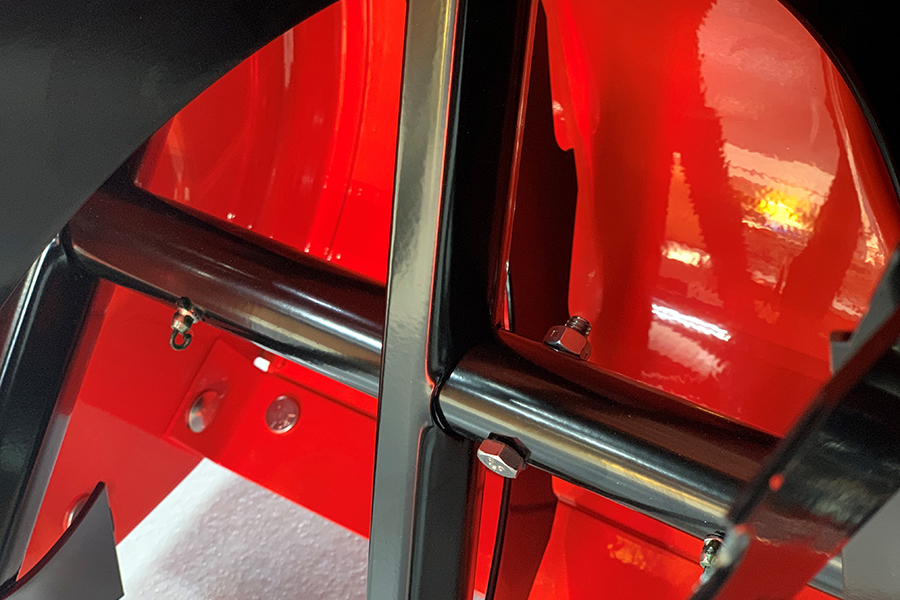 Snow blower belt breaks are normal, which is why it's important to frequently check them for signs of wear or damage. If the belt wears through and breaks, it won't damage your unit, but it will leave your snow blower dead in its tracks. 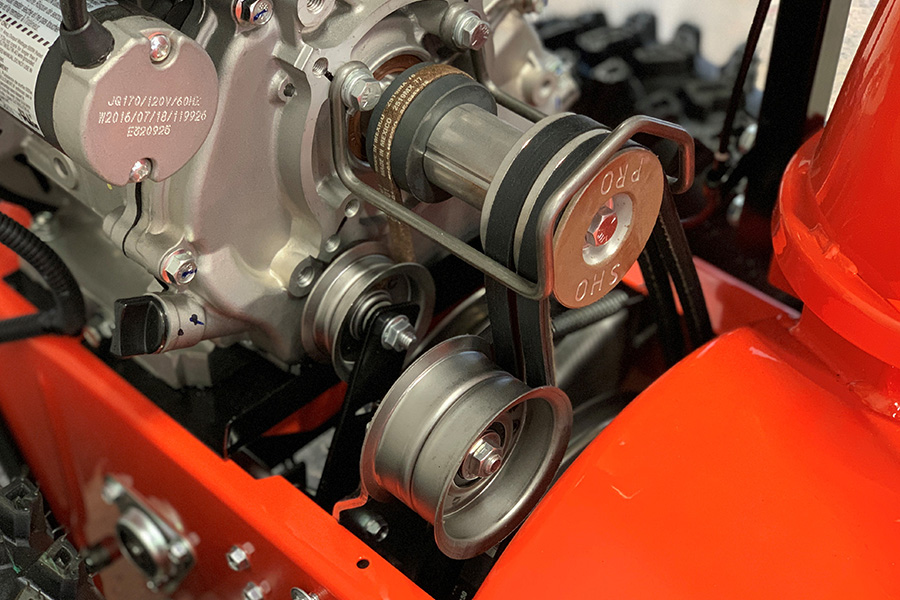 Two stage snow blowers have a belt that controls auger and impeller rotation and another that controls the power assisted wheels. Both belts can be​ easily accessed​​ by removing the belt cover from the unit so they can be inspected for signs of wear:​

Snow blower belt edges should be smooth and even throughout the entire length of the belt. If even a small portion of the belt is worn, it's at risk of breaking and should be replaced.

Look at the belt edge that contacts the pulleys. If it appears shiny, glazed or burned, it should be replaced.

If the belt appears brittle or is deteriorating and has cracks, even shallow cracks or fraying, it's at risk of breaking and will need replacement.

Ariens snow blower belt replacements can be completed by anyone with help from the service guide for your unit. A snow blower belt change video for certain Ariens Deluxe and Platinum series models can be found here.​

Snow blower oil needs to be changed at least once per season because oil breaks down with each use. Whether your snow blower is used in heavy or light load conditions, its oil will deteriorate and become less effective at protecting its engine. Operating an engine with old oil can lead to engine damage and cause an engine to have a much shorter lifespan than an engine that has had regular oil changes.​

Snow blower oil needs to be changed at least once every season, and possibly more frequently if used in areas or conditions where a snow blower is used more. Though it sounds like a burden, oil changes are easy and can be accomplished by anyone with a few hand tools. Start by running the engine for a couple of minutes. This incorporate contaminates that settled to the bottom of the oil system throughout the rest of the oil and warms the oil so it flows better. Once things cool down a bit, follow our step-by-step instructions on how to change snow blower oil.

Snow blowers need to be greased in a few locations to help prevent rusting, parts from seizing and to keep everything moving as designed, season after season. Though single stage snow blowers generally don't have any grease points, there are a few critical areas of a two stage snow blower that need to be lubricated:​ 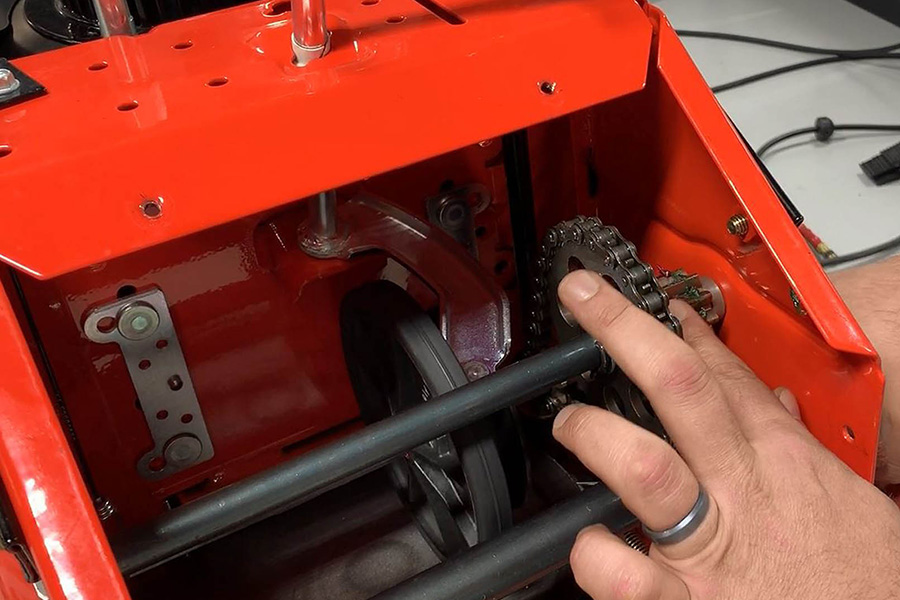 Learn more about snow blower gasoline and why it's important to use the right grade of fresh gasoline in your outdoor power equipment.​

Do you know what the spark plug does? It's the small mechanism in your engine that creates a spark, igniting the fuel that creates combustion in the engine, which makes the engine work. If your spark plug is "fouled" with oil or carbon deposits, it could prevent a spark from being generated, keeping the engine from starting.

If your snow blower has trouble starting, the spark plug is one of the first places you should look. Remove the spark plug and inspect it for cracks, corrosion or residue build up. If your inspection reveals a dirty or fouled spark plug, you can try cleaning it with a wire brush, or you can replace it for no more than a few dollars. You can also use a spark tester to confirm that your spark plug is working correctly. The spark plug needs to be kept clean and replaced after every 100 hours of use.​

If you like to do your own snow blower service, always remember to complete your service according to the instructions outlined in the operator's manual and the engine manual for your unit, and to follow the safety instructions in your manual. If you prefer your local snow blower repair shop do the work, you can find a snow blower dealer near you with the Ariens dealer locator tool. Replacement snow blower parts and snow blower accessories can be found online at parts.ariens.com or at your local Ariens dealer.